In the 1960s, American workers constituted a labor aristocracy on a global scale. The United States led all other countries in global manufacturing. Productivity levels and thus wages were higher in the US than in other leading economies. Even without a high school degree, male workers could make a middle-class income in an auto or steel plant. Income inequality was at an historic low after half a century of decline and social mobility was high. Roughly one in three workers was a union member.

How things have changed. Consider, for instance, the automobile industry. As the chart below illustrates, US auto production dwarfed that of any other country in the 1950s and 1960s. Today, however, US-based auto production remains about where it was six decades ago while production elsewhere around the globe has skyrocketed. China now produces twice as many vehicles as the United States. It is similar in other industries. 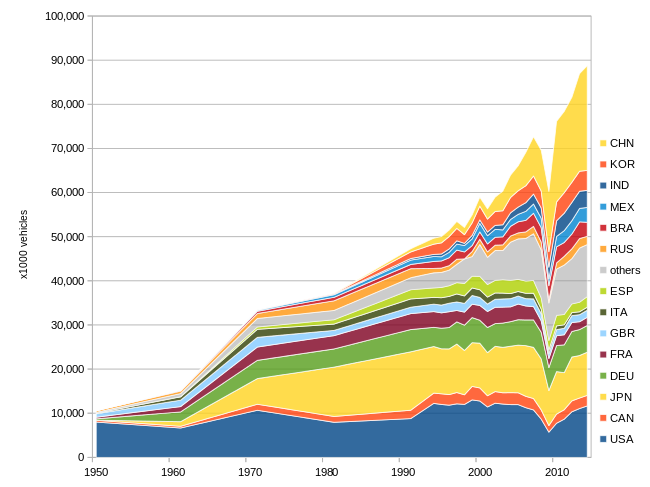 Once lucrative manufacturing jobs have disappeared not only due to the shift of production overseas but also due to automation and rising worker productivity. 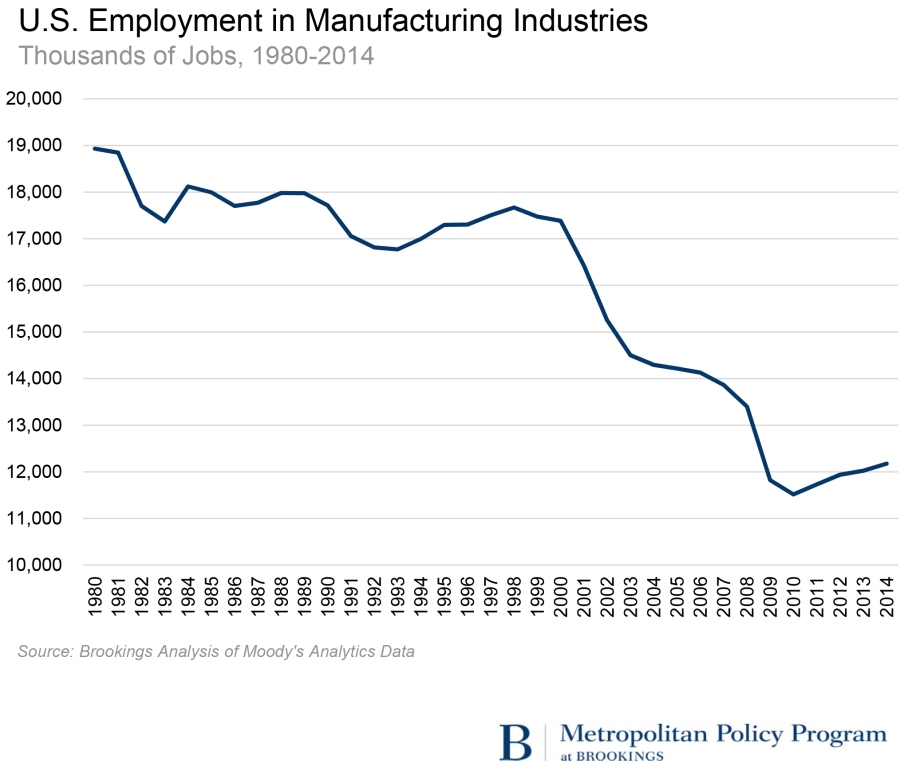 Yet since the 1970s, productivity gains have been captured not by American workers, but by the owners of capital. 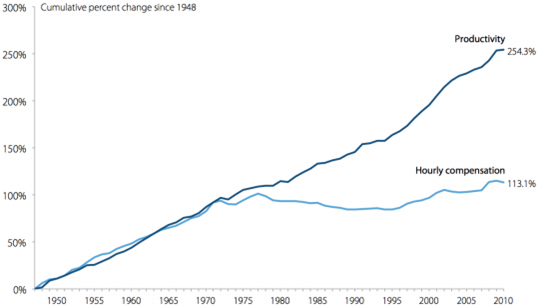 Real wages and income have therefore stagnated for most workers. 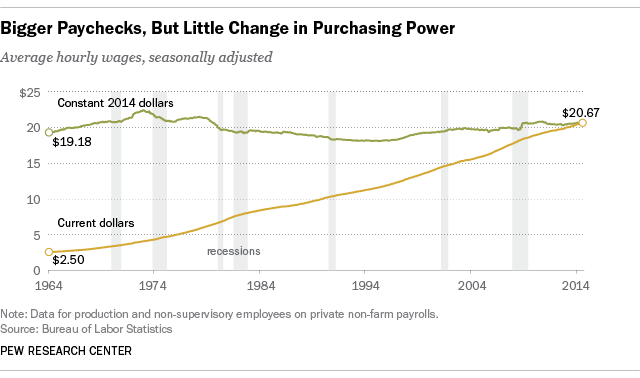 This is especially true for men. While female income has continued to rise – thus gradually reducing the gender pay gap – average male earnings have actually declined over the past half century.

Changes in the fortunes of men and women are also evident in trends in labor force participation. Fewer men are entering the workforce while the opposite is true for women. 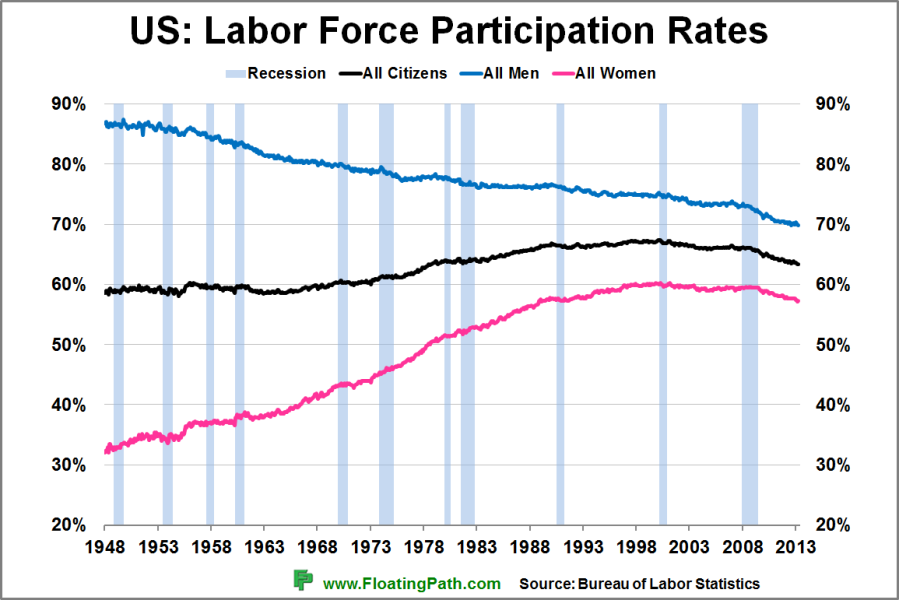 Meanwhile, virtually all of the income gains of recent decades have gone to those at the top of the income distribution, thus widening the inequality gap and reducing social mobility.

The chart below shows that the income of males without college degrees has fallen sharply over the past quarter century while the biggest winners have been women with a bachelor’s degree or higher. 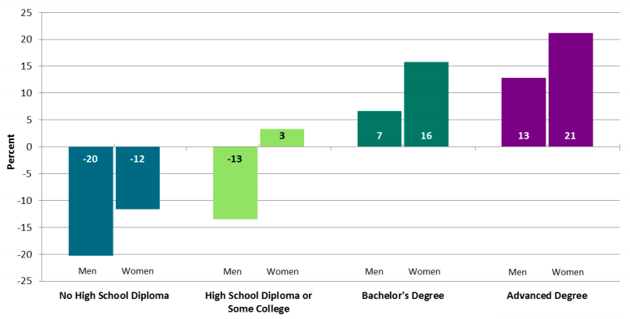 The current level of income inequality rivals that of the 1920s and far exceeds the relatively equitable distribution of the middle of the 20th century. 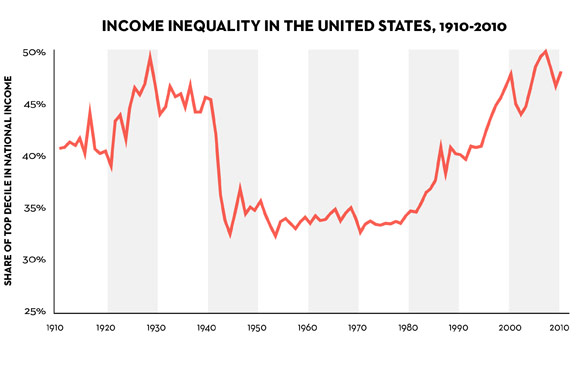 The declining share of income that goes to the middle class has been closely correlated with a declining union membership rate. 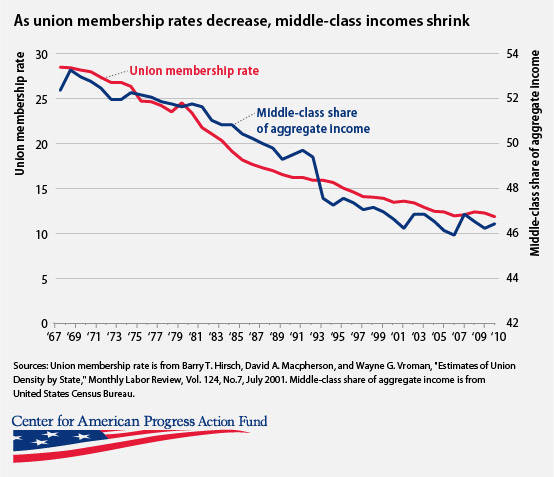 In a sign of growing social distress, the death rate among middle-aged white males in the US has risen over the past decade, in contrast with the usual pattern of falling death rates (see red line in chart below). All of these trends help us understand the success of Donald Trump. Trump draws his strongest support among middle-aged white males who are less affluent and less educated – precisely those Americans who have suffered a loss of relative economic and social status over the past half century. This same demographic group was, relatively speaking, prospering in the 1950s and 1960s. But the manufacturing jobs that supported this prosperity have either moved overseas (Chinese imports alone may have cost 2.4 million American jobs between 1999 and 2011) or been eliminated through productivity-enhancing technological change. The latter trend might have led to rising incomes for those who managed to maintain jobs in the manufacturing sector, except that the returns to capital have risen sharply relative to the returns to labor. At the bottom of the income distribution, an influx of low-skilled immigrants over the past several decades combined with the failure of minimum wage rates to keep up with inflation have depressed wages for the least educated. What few gains workers have been able to eek out have gone mostly to women, who have joined the workforce in higher numbers while also managing modest improvements in compensation (though the gender wage gap nonetheless persists). Globalization has also allowed capital to seek out cheaper labor and higher returns in developing regions, thus undermining the bargaining position of North American and European workers. As a result, private sector unions have practically disappeared in the US. Without unions to provide some direction for working class discontent, a populist figure such as Donald Trump can harness this anger by bashing immigrants and imports.

On a global scale, the following chart situates the American working class within the global income distribution. The income of those at the top – the owners of capital – has grown rapidly as globalization has provided capital with access to cheap labor outside of Europe and North America. Incomes have also grown rapidly in emerging economies – such as China – where previously impoverished workers have gained access to the kind of factory jobs that Americans enjoyed in decades past. The group that has experienced no gains are the workers of North America and Europe. While this group remains well off in both absolute and relative terms, it has fallen behind, over time, in comparison with the highly educated global elite and the rising working class of the developing world. 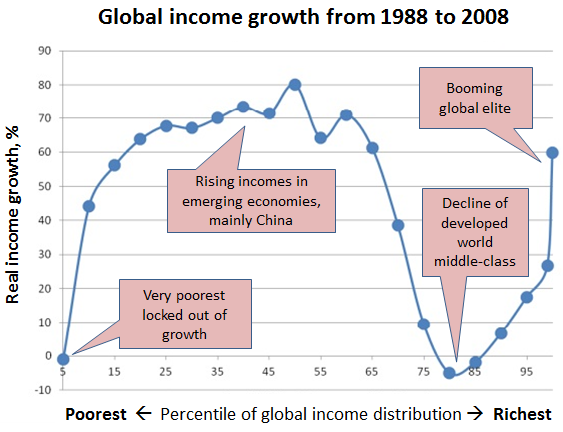 The brand of populism and nativism that Trump offers working class American males provides no real solutions to the downward mobility that this group has experienced. But until mainstream politicians and parties address the real grievances of American workers, one can expect more disruptive politics.

The Political Economy of Trump

But it is not Trump’s racism that rankles the Republican establishment. After all, congressional Republicans opposed George W. Bush’s plan for immigration reform and rejected extension of the Voting Rights Act while at the state level Republican-controlled legislatures have passed voter identification laws that represent transparent efforts to suppress the minority vote.

So while it is politically expedient to distance themselves from Trump’s crude rants, it is not racial sensitivity that is driving the discomfort that Republican insiders feel about Donald Trump. Instead, the problem lies with Trump’s preferred policies toward trade, taxes and spending and debt. In short, Trump is out of sync with the corporate and investor interests that lie at the center of the Republican coalition.

The GOP brand is associated with lower taxes for the wealthy, smaller government, freer trade and tight money. These policies fit the preferences of corporate political backers such as the Koch brothers.

Trump, of course, is a businessman himself. But as a real estate developer, Trump’s interests differ from those of Wall St. or big manufacturers. Unlike bankers or hedge fund managers, developers are borrowers, not creditors. In contrast with manufacturing firms that export goods, real estate lies in the non-tradable sector of the economy. While many businesses and wealthy individuals prefer low taxes, developers of office buildings, hotels and casinos benefit from the public goods created through government spending. Trump’s business interests and his worldview are thus distinct from the business groups that have long held sway within the Republican Party.

Trump has declared that “I am the king of debt. I love debt.” In contrast with Paul Ryan, Ted Cruz and John Kasich, all of whom have castigated Fed Chair Janet Yellen for keeping interest rates low, Trump has mostly offered praise for Yellen and indicated sympathy for a loose monetary policy.

Indeed, Trump has suggested that this would be a good time for the Federal government to borrow money to fund infrastructure spending because interest rates are so low. More controversially, he indicated that, as President, he would be prepared to cut the Federal debt by negotiating reduced payments to holders of Treasury bills. This is, of course, how Trump himself escaped debt obligations numerous times under the cover of bankruptcy proceedings. Even the suggestion that the United States government might renege on some of its obligations to creditors set off alarm bells among investors who have large holdings of Federal bonds.

Trump’s views on taxes and the size of government are also worrying to Republican leaders and their business friends. While Trump proposes reduced income tax rates – a perennial Republican mantra – he has waffled on whether the wealthy might have to pay more in taxes. In sharp contrast with Paul Ryan, Trump rejects cuts to social security and Medicare. He also calls for increased military spending and, as mentioned above, growing public infrastructure investment. All of Trump’s proposed spending cuts would focus, implausibly, on the relatively small portion of the Federal budget devoted to discretionary spending. Combining Trump’s various tax and spending pledges, the Tax Policy Center estimates that his proposals would produce falling revenues and ballooning budget deficits. In short, Trump is a fiscal Keynesian.

Perhaps the most glaring area where Trump defies Republican orthodoxy is international trade. Calling NAFTA a “disaster,” Trump has promised: “We will either renegotiate it, or we will break it.” Similarly, Trump has called the TransPacific Partnership agreement “insanity.”

Trump’s own business investments lie mostly in the domestic, non-tradable sector of the economy. Trade and foreign investment are tangential to Trump’s principal businesses. This frees Trump to make a protectionist pitch appealing to working class Americans who feel threatened by imports (and immigration). This places him closer to the interests of a significant, but otherwise poorly represented, segment of the Republican base whose economic interests are misaligned with those of the party’s globalized business elite funders.

Among Republicans, a voter’s position on trade is a powerful indicator of their attitude toward Trump’s presidential bid. The force of Trump’s anti-trade appeal is evident in the finding that 89 of the 100 US counties most exposed to Chinese imports voted for Trump in the Republican primaries, while Trump won only 28 of the 100 countries least exposed to Chinese imports.

A recent PEW survey found that while 51% of Americans overall view trade deals as good for the United States, two thirds of registered Republicans who support Donald Trump consider trade deals bad for the country. Democrats are now more supportive of free trade than Republicans, a reversal of patterns dating back to the 1970s. Republican pro-free trade politicians and business must now confront the possibility that Trump has shifted the party’s center of gravity toward a protectionist stance among the base.

Trump voters vary from traditional Republicans in significant ways, as is evident from recent PEW polling.

Donald Trump’s fusion of nationalism, protectionism and right-wing populism has tapped a politically rich vein that will be available for others to mine long after Trump’s own presidential ambitions have been squashed. The political economy of Trump represents a potent challenge to long-standing political alignments, especially, though not exclusively, within the Republican Party.